Spices-Bringing out the true essence of a biryani 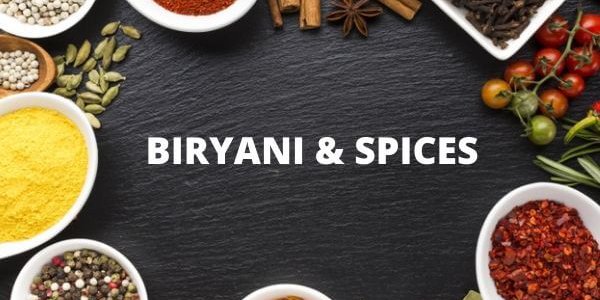 Biryani is known to bring people of varied backgrounds together since for Indians, biryani is more than mere food, it is an expression of emotion. Be it a family get-together or a weekend party with friends, biryani is a constant that everyone loves and savors, be it lunch or dinner. Every biryani boasts of a unique taste thanks to an ingredient that isn’t given its due value, the spices.

The heavenly taste of the Biryani can be easily attributed to the wonderful spices that form a vital part. It is the spices that make the biryani such a popular option at homes, offices and parties and hence they need to be sourced sensibly and the right quantities have to be added to the mix of rice and meat. While most of the spices are used in powdered form, spices like bay leaf, cloves etc. are often used in whole during making of the biryani.

Chefs ensure that all the spices used in the biryani preparation are fresh and of good quality, which is why the vendor or source is a reliable one. If you miss this step, the aroma of the biryani will go for a toss since stale spices can ruin a completely perfect biryani. World over, Indian spices are known for their freshness and quality and this is primarily because Indians have perfected the art of cultivating and storing spices.

The list of spices is unending with cloves, cardamom, nutmeg, star spice, bay leaves, black pepper, cardamom, coriander and cumin leading the way when it comes to bringing glory to a biryani. There are many chefs who swear by whole spices instead of powdered ones, while some recommend coarse ground spices if not the whole ones to retain the flavor and taste. The choice is entirely a personal one, dominated by past experiences.